As a lot of you know we have been running a program for women for about four years now.  During the last few months the attendance has been dropping off.  I feel that probably the women have reached a saturation point with what the teacher was teaching them.  We only had one class so they really could not move up.  It was a tough decision to close it as some of the regular women were still showing up.  The Annurpurna Rotary club were asking me to start a new one at Sarangot.  There was a great demand among the women here and I met with them and decided that we should give other women a chance to learn to read and write.  Most literacy programs here only run for six months and ours has run for four years.  I interviewed all the women and out of 28 only 2 had had a little schooling, all the others had never been to school even though some were very young.  Also the Rotary said they would help monitor the program which is a help for us.  I hope the sponsors of the women in the program will understand my decision to switch and help more women.  In the last program I saw the women make great progress in only six months, they learned to write very quickly and during those four years even learned a little English which they all want to do.  The first priority though is for them to be able to learn Nepali and be able to sign their name etc.  This program costs $10 a month to sponsor one women.  When I met them in the classroom they were excited but nervous.  Some had sad stories to tell about their personal lives and their tough conditions.  I talked to them about the great benefits of education and being role models for their children and wished them luck. 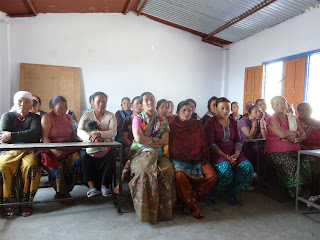 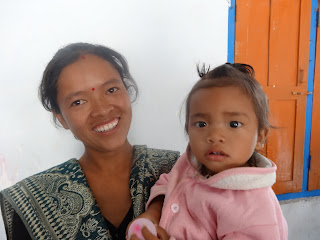 Posted by Susan Marshall at 5:17 PM