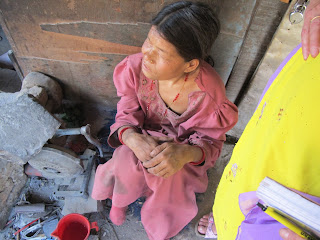 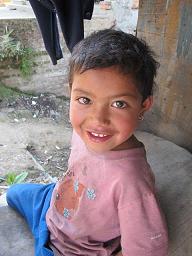 Some of you will remember the story last year on this blog of the lady who nearly lost her foot.  On visiting her we found that she had a large ulcerated hole in her foot that was badly infected.  We took her to a private hospital where she received treatment and surgery and eventually skin grafting.  The infection was half way up her leg at the time so had we not visited at that time she likely would not only have lost her foot but her life.  She had no money for medical treatment and her sponsor paid for her hospital treatment.  She was also blind.  Unfortunately she died a couple of weeks ago.  We are not sure what the cause was other than it was a stomach problem.  She was never a well lady.  She leaves a five year old child, Santi, who now is in a small children's home run by Mann's wife, Sima.  Mann is NEF President in Nepal. Her father is not able to care for her as he is an alcoholic.  The bright side is that Santi is now being well cared for and is clean and well fed.  Before the school was always complaining about her dirty condition and attendance.  Santi is a bright little girl and I spoke to her on Skype a couple of weeks ago when she was visiting our office.  She was very outgoing and happy to talk with me.  Hopefully she will be happy in her new home.  She has lost her mother but now has a more stable future with regular food and education.
Posted by Susan Marshall at 1:00 PM 1 comment:

Uma has been sponsored through NEF since the begining in 2004.  She started school at age 11 as her family was too poor to pay her school fees.  Uma is bright and learned fast but she was always a long way behind her peers and the children in her classes were half her age.  She spent two years in a children's home at age 13 as her mother could not manage her.  Here she did well but after two years wanted to go home.  We enrolled her in a private school attended by her brothers and sister.  She progressed well for awhile and then started skipping school.  A year later she was missing from home for several weeks.  We do not know where she went during that time.  She returned to school promising us that she would improve and not be absent.  This lasted only a matter weeks and then she left school for good.  This was over a year ago now.  When I visited her in the spring of this year she was looking very forlorn and unhappy.  She asked me if I would give her another chance.  She realized it was too late for her to go back to school as again she would be in the same situation with younger children which she could not cope with.  When she was in the children's home she had learned some sewing and her sponsor had bought her a sewing machine.  I suggested that she could go to a sewing and tailoring course and learn this trade.  Fortunately she has a very good sponsor who has been to Nepal and met her.  The sponsor was willing to help in any way she could partly because when she visited Uma at her home and saw the poverty that she lived in she understood the difficults that Uma was experiencing.  Uma has now been in the sewing school for nearly two months and she has not missed a day.  Mann said she has improved so much and that he never thought it was possible.  When he goes to visit the home she is always there working with her sewing machine.  This is a girl who always ran off when she saw us coming.  Now he says she is a different person and her attitude has changed completely and for the good.  We are very happy that finally our persistance has paid off and we have helped this young lady find a purpose in her life.  Without NEF's help she would have had no chance and she would have been very vulnerable on the streets of Kathmandu where thousands of girls end of up in the sex trade in India.
Posted by Susan Marshall at 2:48 PM 2 comments: