It seems every year there is a dog story to be told.  After all children and animals are the most vulnerable in society and especially in Nepal.
A year ago we adopted a dog from the KAT (Kathmandu Animal Treatment Centre) for Mann's brother's children home as they were looking for a dog.  Jenny is a lovely lab cross so gentle that she was perfect.  She had been found near death on the street with her puppies all of which died.  Someone was trying to sell her.  At KAT they nursed her back to health over many months.  The staff and volunteers all loved her.  She was and is a special dog.
Kamal phoned me yesterday to say she was not well but he had taken her to a vet at a cattle place who basically did nothing.  Jeff was treating teeth at the home today so when I saw the dog this morning I realized she was very sick.  She had a huge hot spot which was red and oozing all around her neck, she was clearly very sick.  I panicked a bit as it was Saturday which is a holiday in Nepal.  After some phone calls we found a vet, got a taxi and after the driver took one look a the dog he drove like a crazy man, honking at everyone to get out of the way and we arrived at a tiny vet clinic.. The vet assured me several times that Jenny would be okay, he was a kind man.  For an hour that poor dog suffered so much pain as he tried to cut the hair away with a bare razor blade, in the end he had to resort to scissors.  When I asked if he had a clipper and surgical blade he said no.  I told him I would bring him one and then he asked if it would be easy to use.  I told him yes and the dog would have much less pain.  She had a lot of infection and he administered drugs intravenously and by injection.   After the treatment he put her on the floor and she wagged her tail as if to say thanks.  Dogs are amazing creatures.  We took her home and I carried her upstairs to Sarjon's room on the top floor.  He is 14.  Sarjon seems to be her best friend and the one to care for her and give her the meds she needs. Sarjon also has been rejected by his family after both his parents remarried.  I left her sleeping next to his bed.  It will take ten days for her to heal.
Life is so raw here.  I have watched Jeff remove teeth in primitive conditions and some are difficult to remove, one lady today taking 55 minutes to remove a tooth with Jeff on his knees bending over her.  But the children and adults are so stoic and brave they rarely ever squirm or complain.  It is a whole different world from that which we live in  and touches the heart in a way that we who experience it are never the same. 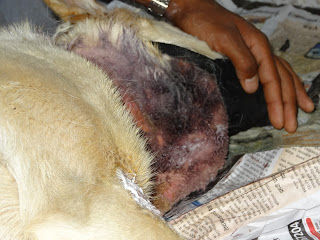 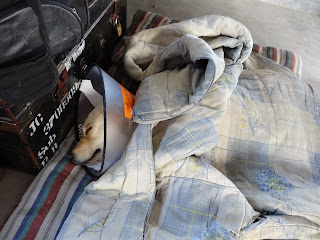 Posted by Susan Marshall at 7:07 AM