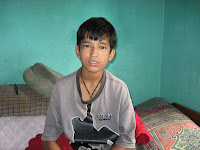 This is a story of a young boy with an entreprenual spirit. He has been sponsored for a couple of years. Last spring he decided he did not need a new school uniform and asked if he could have the money instead which would have been about $20. My friend Ram who was looking after this for me agreed. Krishna then took the money and bought vegetables to sell on the street. He goes at 5am to get them and sells till 8am when he goes to school. He goes back after school to sell them again. This has been his routine since the spring and he has now saved $100. Most married women in Nepal wear a piece of gold jewelley, it is their custom. As his mother did not have any he bought her a piece from his money. He also bought a bike for 400 rupees and sold it for 500. He now wants to open a bank account to save his money for his future education but in Nepal you have to be 18 to do this and he is only 14. He is doing well in school also and reads and writes English now.
We liked this story as we know he will do well and has used our help in a different way but with a good result.
Posted by Susan Marshall at 9:34 PM