'Manu is just starting class 1 at nine years old.  His mother is very poor and  has no useable hands as they have been badly burned.  She earns a meagre income begging at the tmple.  When we met Manu he was seven and really wanting to go to school so NEF sponsored him to go to Government school where he started in nusery class.  That is not what he wanted so he went to the High Mount which is private and refused to leave.  His sponsor agreed to pay the fee and he is happy and attending regularly.  I find Manu to be an extremely lovable child who has a lot of determination.  He is always delighted with his sponsor's letters, the first time I gave him one he tried to give it back to me, he could not believe someone would write to him.  I gave him this medal, donated by one of my running friends, and told him it was for his good work and attendance at school.  He was very happy. 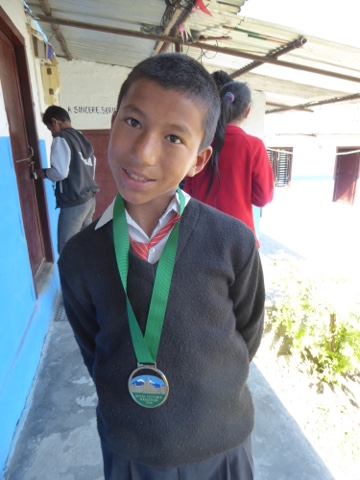 Posted by Susan Marshall at 5:32 PM

Nice post. Thanks for taking time to publish this useful information! It is no more difficult to find undergraduate scholarships in India with ScholFin.

Thanks for this info. Keep up the neat work. I'll be returning often thanks for sharing...
www.aipmt.nic.in
Neet 2017 cutoff