Rescue of a Stray Dog

Today was one of those days when plans go awry and fate decides what happens.  We went into Thamel, the tourist area, to check on accomdation for the Rotary visit.  We walked around one of the back streets and there was this little dog who came up and wagged her tail.  She was a pathetic sight with no hair on her body as she was riddled with sarcopic mange.  I asked some young guys who owned the dog and they said she was a stray.  I was upset at her condition and a young man said "this is Kathmandu" how well I know that.  A taxi was right there and I asked him to take us to the Kathmandu Animal Treatment Centre and he very kindly agreed.  It was a little difficult getting her in the taxi as she was scared but once in she settled on my lap.  Her skin was broken in places and coming off everywhere.  It is a good half hour journey to the north end of the city.  I felt very emotional with her on my lap, such a lovely little dog in such a pitiful condition.  Once there I carried her in and put her in a cage and she settled nicely.  They will treat her and probably keep her for two months.  There is no hair on her body and the red collar indicates that she was spayed by KAT.
Top photo as we found her on the street and bottom one in her cage at KAT. 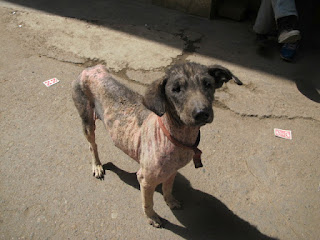 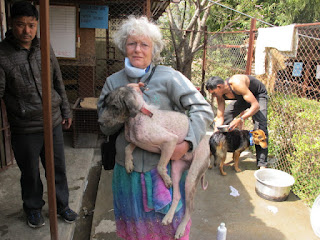 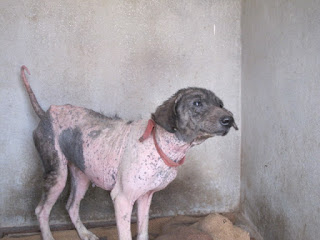 Back in January I wrote here about a family who were donating their Christmas money to NEF.  The eldest girl, Alexis, wanted her money to go to help animals so I donated the money to KAT for the treatment of this dog.  They asked me to name the dog so I have asked Alexis to do this.  I will return to see the dog next month.  KAT is a wonderful charity that helps the street dogs of Kathmandu and also spays the female strays to cut down on the population of street dogs.  I always visit this centre when here and took a Duncan vet there when he visited two years ago and he enjoyed watching the vets doing surgery on the street dogs.  Somehow children and animals go together as they are both so vulnerable to neglect and both are so forgiving.  Afterward I thought about the taxi driver and how grateful I felt toward him as not many drivers would have allowed a dog in that condition in their cab as she was dropping skin everywhere, I was covered in it.  He said he was going to wash his cab out when he got home.  He also did not charge us too much for the distance he went.  Thanks to him whoever he is.
Posted by Susan Marshall at 4:35 AM