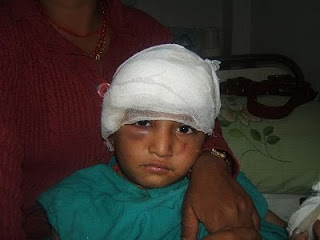 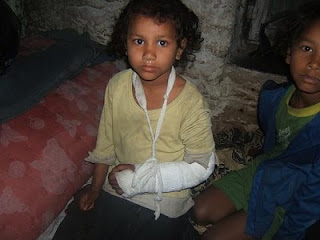 Last week when Mann was in Pokhara and went to monitor our families there he found that two children had been hurt.  Sabita, who is sponsored through NEF, had a broken arm that her mother could not afford to have treated.  Two days previously she had injured it and it was sore and swollen.  Mann gave her the money to take Sabita to the hospital where it was put in a cast.
The other child is not sponsored through us at the moment but his mother is sponsored and in our literacy program.  Her son was hit by a bus.  The bus was overtaking a car and hit the child and then took off.  It was carrying no passengers at the time.  The police caught the driver the next day and the bus company has to pay 60% of the medical costs.  The child is in the hospital with head injuries, a broken arm and leg.  Rita is already suffering financial hardship as her husband went to work in the middle east and while there had a motorcycle accident in which he suffered multiple injuries including a broken leg and so is earning no money and does not have the funds to come home.  So now somehow she has to find 40% of the funds to pay for  her son's medical care.
Posted by Susan Marshall at 9:45 AM