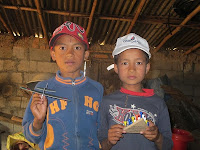 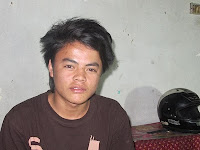 Yesterdau was a sad day. We visited Bijay to the left here. We have sponsored Bijay for about 5 years now. He was a happy child and although their room was very poor it seemed to have a good feeling about it. Yesterday I was shocked to arrive there and the room was in total darkness, no electric and also no window. A lady arrived with a light for us and Bijay was inside sitting on the bed. The room was stripped of the few trimmings it once had pictures, small furnishings etc. Now all that was left was a bed and some cooking items. The concrete walls were black from Kerosene smoke and the whole scene was dismal. The mother had left with the other son and taken everything with her leaving Bijay with his father who was working at a labour job. Bijay was so sad, he looked like he was trying so hard to hold back his emotions. I asked him what we could do for him and he said he wanted to go to college. He has just taken his School Leaving Certificate and will not know the results till July. In his state I wonder how he could pass, this is a tough exam. We offered him some computer classes in the meantime. I wondered how could this little family have come to this and I also in my mind compared this 16 year old to one in Canada. I felt just so sad. I asked him what he did all day and he said he was trying to get a job but otherwise nothing. I gave him a hug and left.

Next stop was the two little boys at the top Umesh and Rupesh. This family is dreadfully poor but the children are a delight and I always enjoy visiting them. Here the mother told us that Umesh has lost a lot of school time because he has been so ill. three years ago he started bleeding from the bowel and she was told he needed an operation but she could not afford that and has not taken him to the doctor since. Now the problem has worsened. It sounded by the syptoms like colitis or chrones disease. He had also had hepatitis she said. Poor child has a lot of pain and diarrhea also. We gave her some money and told her to go to the Children's Hospital and she has gone with him today. This poverty is awful and grinds away at me, some nights I lay in bed and cannot sleep. I also have to decide where do we put donation money? Does it go to extra tuition for some children who are struggling, does it help some students go to college where the sponsor cannot pay for the child to attend, does it help children like Umesh get medical treatment, a child like Sunita from a remote village get extra tuition and pay for her food. Does it go to help poor schools with sports equipment etc. All these questions we ask ourselves everyday. I have know most of the children for some years now and their pain is our pain and we have to help them. Anyway I must get on with today and hopefully it is a better day.

Posted by Susan Marshall at 7:49 PM