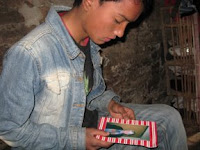 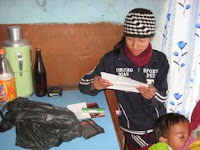 Yesterday we visited 6 families, two at the stone quarrey, the tea shop, a new family and two others. At one of the homes I had to tell a 15 year old boy that I had lost his sponsor, this is the second time for him in two years. I saw his face drop. He had been so pleased in october when I brought him a letter from his sponsor and now disappointment. I matched him again with someone I really believe will good, I hope. This is really difficult as I felt for him. He works hard and stands first in his class. There were two others yesterday who are now on their second sponsors. I wish I knew of a way to avoid this. Forthose of you who remember when we lost the little boyDawa with a brain abscess well his older brother is having some difficulties, the family has had a lot of heartache this last year with other deaths and the loss of another child to adoption. When I gave him the gift and photo of his sponsor he was so moved. He stared and stared at her picture and when I asked him to open the gift he became very emotional. This must have meant so much to him at a difficult time. Your letters do mean so much to these kids Iwish you could see their faces when they open them. And theysave them.

On the bright side I had a monetary gift for a very poor family from their sponsors to buy food etc. Wow what joy that brought. the mother was quite beside herself and I found it very moving. It was like she could not believe this was happening to her. At the end of grocery shopping I took her and bought her a new sari and her face just did not stop smiling. I made the man pull them all out and made her choose. She was reluctant saying she wanted me to pick. We finally got the job done with her choice.

This morning was taken up with a dog that was stabbed in the leg. I tried towalk past but could not being a dog lover and to cut a long story short I got a rickshaw and the street man who had the dog and we loaded it in and went to a vet hospital and got it sutured. the dog was bleeding badly and it was a long way to go but it ended okay I hope I will check tomorrow. The caring ofthe street man and driver was overwhelming. It must have been quite a sight the three of us in the rickshaw and bleeding dog. A lovely dog too. I shed some tears over it to think someone had stabbed it in the garbage pile. Such is life in Kathmandu.
Photos are Ranjita and Dinish with their letters.

Until next time.
Posted by Susan Marshall at 1:20 AM