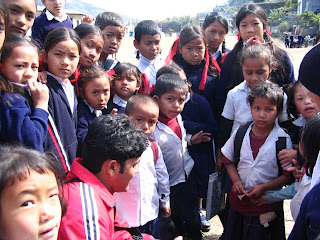 Pokhara was a very rewarding time for us although very busy and long days. We are working in a very poor area like a refugee camp for poor people from villages. There were many sad cases here. The lady who was supposed to have been burned from cooking actually tried to kill herself by burning herself to death. Fortunately her husband awoke and saved her. We sponsored her little girl and bought them a two burner gas stove. Another little girl 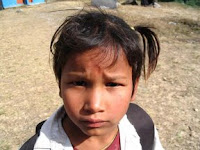 we sponsored her father was drunk and arrested by the Moaists some months ago and has not been seen since. We had long discussions here about who we should help.
A young lady named Moti helps us here. She told me she wanted to help poor children but could not afford to herself but by helping us she is fulfilling her wish. One boy aged 12 we met at the school had no school uniform or shoes. He was the only child in school without a uniform. He made himself known to us than then followed us for two days. We asked him into Moti's home and asked about his life. He had no parents and stayed with a man who was dumb and this is where he got his only meal of the day. He had recently returned to school and we told him if he would continue to go to school we would buy him his uniform which we did. To see this boy getting his new shoes was quite something. He was anxious as to when his uniform would be ready. We phoned last night and he will pick it up today. I am going to return to Pokhara again before I leave to see these children again and to see Sunil in his uniform.
Kamal and I both found this boy to be quite special and his persistance paid off. Susmita who I told you about recently had a very bad skin problem on her arms and legs. We gave the mother money to go to a doctor which she did the next day and she now is being treated with medication and returns to the doctor in a couple of weeks. Her mother was very concerned about this and now hopefully the problem will be cured.
Posted by Susan Marshall at 1:33 PM