Yesterday when I finally went home from the internet place, and when I returned, the children had a small puppy in their arm. Kamal's mother, (Kamal runs the shelter with his wife), had taken the children out for a hike and got the puppy from someone. So now we have another new addition in the house. It is a female, very sweet and cuddled up on my lap last night by the heater. I have been experiencing difficulty trying to send pictures but I definitely will try again soon.
I have just spent an hour trying to send photos and it is not possible. The man is now eating rice so I cannot get anymore of his help. I have tried from this site and from gmail with no luck. I would rather tell you about what I am doing than trying to do this photo thing which is frustrating me. The computers here are not like ours. They are third world and not the most modern.
The new Child Blessing Shelter Home 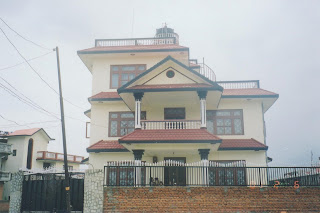 Anyway the house(new shelter), as you see in the picture, is a bigger six bedroom house quite close to where we are now but not as luxurious at it seems as it is all concrete inside. It has a small enclosed yard and has a good sized kitchen, dining and living room. Two bathrooms, one with shower and other with just toilet I think from what I can remember. There is solar hot water which means usually luke warm at this time of year. We move in a few days from what I understand. I have to go now and visit some children.
Sponsor/Child Matches.
I think that is 11 matched so far with another 4 tomorrow and about 7 on Monday.
A Tragic Story:
The Rana Magar children have a rather tragic story. 18 days ago their father got up and went to the toilet, he fell while in there hitting his head on the toilet. He died on the way to the hospital. He has left a wife and these four children. The mother has no money or income. I talked to her brother who did speak some English. I asked whether we maybe could get her to learn some skills such as sewing so she could at least have a way of making an income to su 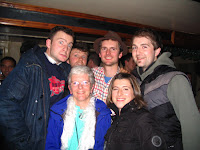 pport her family. She sat there silently crying while we were talking about this. It is a hard reality that she has to find a way to make some money. I picked her youngest child for the beard growing Bristol Boys (showed on the right), from England because they want to send a child to private school for who it's whole schooling years and college if needed. This lady will need a son with a good education to keep her in her old age. The father was 43 and a trekking cook so had only had a small income but now there is nothing for her and the family. They were very appreciative of our help and support.
Stone Quarry Family 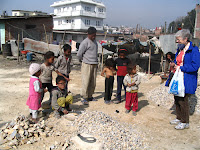 We visited here twice now. The other day we paid more off Sanu's debt. For those that do not know. Sanu went off to Kuwait last year to work as a domestic. In spite of us pleading with her not to do so, she went anyhow as she wanted to earn money for her family. Within a few week, she was desperately wanting to come home as she was being badly treated. All this incurred a debt of about 500 dollars. We previously paid $200 from the garage sale money and her sponsor. While we were paying the auntie who secured the loan, Sanu sobbed her heart out with shame. The father all the time was saying that if she had listened to us all, this money would not have been necessary. He and Jagat, my trusted aid, were also telling her that now she has to work so hard at school and to repay us by doing well at school and going to college.
No one seemed concerned by her tears but me. I told her that the loan is being repayed by us so she can finish school (otherwise she would have to go to work to pay it) and start life with no debt. This is a huge amount for them to pay that would have taken years. I told her she owes us nothing, but I would like her to finish class 10 and only go to college if she wants. I told her we all make mistakes and she was only trying to earm some money to send home to her family. I stopped her tears by telling her that I would take her out for lunch and shopping. 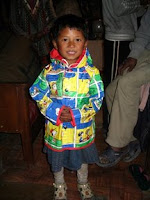 In the meantime her little sister Juni on the left, was dancing around in a Snoopy raincoat I gave her stopping occasionally to look at her sister with concern. This family lives in a little tin shack at the quarry. Her father and Mother are very grateful but the father seems to be very hard on Sanu. He only makes a dollar a day so I guess all this debt is a huge amount of money to them. The mother is so sweet and looked so nice in the new clothes I bought for her a few days previously. These were also generously donated by her sponsor.
Gary I am still at this darn poo poo computer. The letters don't correspond to what comes out on the screen. Must be a secret code or something. We Went to see Nauchen today. She is in class 10 and now starting to take her SLC exams. (School Leaving Certification.) She is a lovely girl. Her older brothers look after her and they are very keen that she does well. One brother asked me if I was satisfied with how she was doing. I said of course I was. He said she has done better this year with our help. She would like to carry on to go to college and they are going to let me know much closer to the time.
The brother was a new teacher but only made about 60 dollars per month. They wanted to give me a picture, the brother had made of the late King Birenda but Ram who was with me suggested they make one of me and then they wanted a photo. I told them that I do not walk around with photos of myself. But Ram said he had some at home. These little gifts make them feel they are giving a little back. They are all so grateful. These three really touched by heart. The boys cared for their sister so much and her success.
I also visited two girls who were among my first sponsored. Samjhana and Shirjhana. This is a sad story. When I met them two years ago they were a wonderful little family. The father had little work. A year ago he went to Kuwait to work. The family missed him terribly. First Samjhana was having problems at school, but she since seems to be okay. Now the mother has had a nervous breakdown and has been in a mental hospital for a month. The two little girls 11 & 12, manage by themselves. Cooking and cleaning and managing the money. They showed me radishes they had pickled. Fortunately I had a nice gift for them both and some extra money. How sad that people have to resort to this just to make ends meet.
I am still very busy doing matches of children with their sponsors but I am making good progress on this. I will update you soon with more developments.

Namaste Everyone
Posted by Susan Marshall at 5:18 PM

Hi Sue, this website is brilliant, I really enjoy your blogs. I take it that from what you have achieved since arriving you are now over your "Deli Belly". Hope you didn't have any trouble with your luggage. The new house looks very posh and I'm sure that once everybody gets all there bits and pieces moved in it will look quite cosy inside. Hope Arjuns tracks suits fitted him, I shall look forward to a photo with him wearing one. (realise this won't be until you get back home) in the meantime keep well, take care,
Irene.