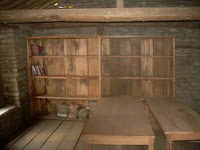 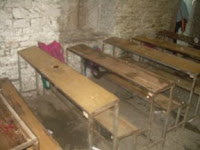 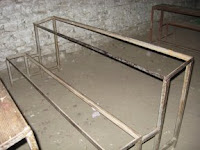 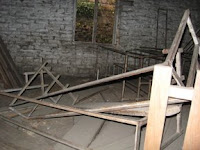 Before and after Photos

Chimkhola is a remote mountain village in the Annurpurna range. I visited this village with Mann while in Nepal and we stayed here as this is where Mann and Kamal were raised. I visited the village school and found the condition very bad. Although the building was only five years old it was basically just a building. The desks were in a deplorable state, the floor were mud, no steps to the office just a plank and the room they were wanting to make into a library was bare.
I had a donation from a lady in Alberta and so offered to repair 20 desks as the frames were okay. We spoke to the carpenter and agreed on the price. Mann was back there two weeks ago and took these photos of the repaired desks and they also had enough money left to make these tables and bookcases. It is just a start but a good one as now two classes have desks that they can use. We also were able to buy a few books for the library but they were put on a donkey that had not arrived when these photos were taken.
Posted by Susan Marshall at 8:49 PM No comments:

Well we have been home for a few days now but still suffering from jet lag. Everything seems to be an effort. I will get to all of you with photos of your children as soon as possible. I have quite a lot of letters also to get out in the mail.
The time in Nepal was as usual very busy and successful. We have experienced a lot of changes. We are now registered as a charity there with the Social Welfare Council which meant that we had to have an office. So I have rented a small place where we are setting up the office and I can also stay there when in Nepal. Mann, who works for us, and his wife Sima will also live there and as it is in the same building as Jagat I think this will work well especially as they have to share the motorbike and computer. It was a big step for us to take but I think now that it is for the best. It will be good to have our own place. Mann, although new to the job, is working out well and he will be doing all the paperwork involved for the auditor etc.
All the children were visited some a few times. All but two passed the school year. Just out of interest the two that failed were boys.
Now I am home it is time to think about fundraising again with our annual garage sale. For all local sponsors it is being held May 31st. I will let you know when you can drop things off or we can pick up. It will be at Monica's again on Calais Rd. in Duncan. More details a little later.
Also as a fundraiser I am making photo cards of the children made on Nepali handcrafted paper which is made by Mann of NEF. If you would like one of these they are $4 each plus postage.
I have added three new photos below. One of Sushant, he is the little boy who has gone blind. He has just been at the School for the blind three weeks but has already learned some braille and has been intergrated into the regular classroom. He was much happier when I saw him last week. The other photo is of the vegetable trolley we bought for Krishna. It had just been delivered when I was there so unfortunately do not have a photo with the vegetables on it. He was just getting ready to paint it. the third photo is of some little children at the Hattiban school who we bought the new furniture for. I will have photos of the village school where we repaired desks shortly.
Posted by Susan Marshall at 12:28 PM No comments:

On My Way Home 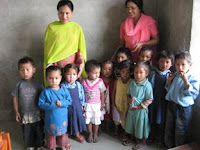 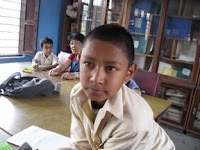 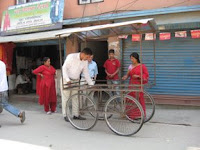 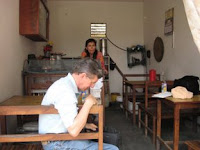 We are in Hong Kong right now and will arrive home in Duncan on Saturday. At that time I will update this blog with photos and final news of the trip. It was sad to leave as it always is but as usual we achieved a lot and this time had a lot of changes.

In the last couple of weeks we started another tea shop for a lady who is widowed with two children. She has an American sponsor who helped her with this venture. She is happy with it and is working long hours to make it a success. She opens at 6am to 9pm 7 days a week and runs it with the help of her two children.

More news when I arrive home.
Posted by Susan Marshall at 6:23 PM No comments: